The Passing of a Legend

On Saturday, December 5th, the world lost a treasure. My friend and mentor Mr. Jim Rohn passed away after a prolonged battle with Pulmonary Fibrosis.  He was surrounded by his family and very close friends, as he often was in life.

Mr. Rohn was a successful businessman and dedicated father.  From humble beginnings as an “Idaho farm boy”, he went on to share his experiences and philosophies to empower people to find more success and fulfillment in their lives.

I was first introduced to Jim Rohn’s teachings in 1994, and had a chance to attend a live 2-Day seminar shortly after that. I have been a devout student ever since. Not a day goes by, nor will it, that I don’t think of Mr. Rohn.  His words have inspired me since the first time I heard him speak, and his simple ways of bringing clarity to difficult topics was unparalleled.

Mr. Rohn was very much in the public eye.  For more than 45 years he spoke with audiences small and large throughout the world.  Over 6 million people heard his words at live events and many more than that through his vast audio and video library.

Personally, Mr. Rohn led a very private life.  He never bought into the “fame” that his work created.  Instead, he was a humble servant who quietly “walked his talk”.  My friend and business partner Pol vahRhee and I had the opportunity to run the sound at many of Jim’s larger events over the years, and we were fortunate to have a chance to spend time with Mr. Rohn “backstage”.  He was a guest on the radio show multiple times.  While I often had a chance to share a few words with Jim, on three occasions I had the honor of sitting with him one on one, just the two of us.  Those are moments I will never forget.

I’m sure that news of Jim’s passing has many people thinking about the ways he influenced them, and thinking about some of their favorite Jim Rohn quotes.  Here are a few of my personal favorites:

“The few who do are the envy of the many who only watch.”

“Always do more than you are paid to do as an investment in your future.” 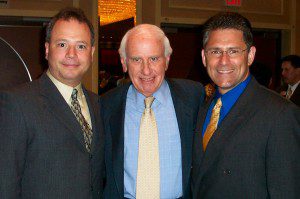 with Real Estate, I offered a draft copy to Mr. Rohn and he graciously agreed to provide an endorsement of the book.  Jim often said, “It’s wonderful when your name appears in someone’s testimonial”, and after years of endorsing his work, I was blessed to have Mr. Rohn endorse mine.

It is because of Jim’s close friend and business partner Kyle Wilson that I had the amazing opportunity to get to know Mr. Rohn, and for that I am forever grateful.  Last year, as Jim was doing his best to deal with his challenging health situation, Kyle spearheaded a project to create a video tribute to surprise Jim and share with the world the effect his work has had.  A few dozen of us were invited to come film a story or reflection for a few minutes, then take an extra couple of minutes to look into the camera and address Jim personally.  With the support of Stuart Johnson at Video Plus, Kyle oversaw the painstaking process of editing all of that material into about 3 hours which he put on DVD and sent to Jim.  You can see a short sample of that video here.   Needless to say, Jim was touched by the gesture and moved hearing directly how his work positively affected so many people.

When we lose someone important in our lives, we rarely get the chance to share with them just how much they mean to us.  Thanks to Kyle, a few of us got that chance.  What an amazing gift…to Jim, and to us.

Jim often spoke about the ripple effect, and that you never know how many people you can influence by sharing meaningful words.  As I browse the various forums where people are paying tribute to Mr. Rohn, I am in awe of the number of people that have had their lives improved by his teachings.  So many of these folks never saw Jim in person, but have come to know him through his recordings.  Fortunately, many of Jim’s seminars are forever preserved for future generations.

I know my life will never be the same thanks to Mr. Rohn.  He was an extraordinary man with a profound ability to bring out the best in people.  Thank you, Jim; it is a gift I will continue to pay forward for the rest of my days.