Income inequality and you …

The growing disparity between the rich and middle-class is obvious.  But that gap doesn’t divide neatly across political lines the way it used to.

So let’s forget politics and just see what we can learn … and do … to close our own wealth gap.

This Bloomberg article captured our attention this week …

The U.S. is Where the Rich are the Richest – Things are looking rosy for billionaires and millionaires as wealth accumulation goes into overdrive.

“Even as economic growth has slowed, the rich have managed to gain a larger slice of the world’s wealth.”

“The tide shifted in the 1980s under Republican President Ronald Reagan …”

So don’t tune out just because you love or hate Reagan.  That’s not the point.

Let’s see if we can figure out why wealth accumulation is in overdrive for some folks … and how we can make some of it happen for us.

There are clues in the article …

“Globally, about half of new wealth comes from existing financial assets – rising stock prices or yields on bonds and bank deposits  – held predominantly by the already well off.”

In plain English, that’s balance sheet wealth …  Assets going up in price and/or throwing off cash-flow.

Note to self:  Acquire assets.

“The rest of the world’s new wealth comes from what BCG calls ‘new wealth creation’, from people saving money they’ve earned through labor or entrepreneurship.”

(BCG is Boston Consulting Group.  The 38-page report which the article is based on is here.)

Those are two very different paths to wealth.  Of course, investing is about wealth creating wealth.  But we’d argue REAL wealth is only created through productivity.

This poses a challenge for investors.

But before we go there, let’s revisit the Bloomberg author’s premise that inequality was birthed as a result of political policies in the 1980’s.

This isn’t to defend or criticize Reagan … but to see why and how the game changed … and how it affects the way we play it today.

In the 60’s, the U.S. overspent on wars and welfare.  We’ll forego judgment on whether those were wise or necessary.  It happened.

Going broke, Uncle Sam reprised a softer version of the gold confiscation scheme from the 30’s … and effectively took all the silver out of the financial system.

In 1964, they took the silver out of the coins and removed the silver backing from the currency.

In 1971, Uncle Sam defaulted on the Bretton-Woods promise to back the dollar with gold … by closing the gold window “temporarily”.  The world is still waiting.

So now, the dollar was no longer accountable to silver or gold.  Uncle Sam could print as many dollars as he wanted.

Soon after, the dollar collapsed, and inflation soared along with the price of gold.

So Uncle Sam cut deals with Saudi Arabia and China to create demand for dollars by linking it to oil … and to import cheap labor via job exports to China.

In the 70’s, the existential crisis du jour was the world running completely dry of oil by 2000.  Not sure what happened to that.  Seems like there’s plenty of oil today.

But it did provide a plausible explanation for the dollar losing value against gasoline … something every voter experienced at the pump.

Plus, the higher oil prices increased how many excess dollars were soaked up into the oil trade. Probably just a coincidence.

But all of this wasn’t enough to prop up the dollar. So Fed chair Paul Volker jacked interest rates up to nose-bleed levels.

It nearly crushed the economy, but it reset the dollar, which has been on a more controlled descent ever since.

In 1987, Alan Greenspan took the helm of the Fed and ushered in a new age of “prosperity” driven by ever-increasing asset prices.

And if, God forbid, asset prices should fall … markets could count on the Maestro to drop rates, print money, and reflate asset prices at all costs.

So the Greenspan “put” was born … as was the “financialization” of the economy.  And both Ben Bernanke and Janet Yellen have kept the party going.

When markets are only permitted to go up, and any downturn is immediately met with huge volumes of cheap money to reflate them, it’s easier to make money with money than to do real work.

And that changes the composition of the economy YOU are investing in.

Take a look at this graphic … 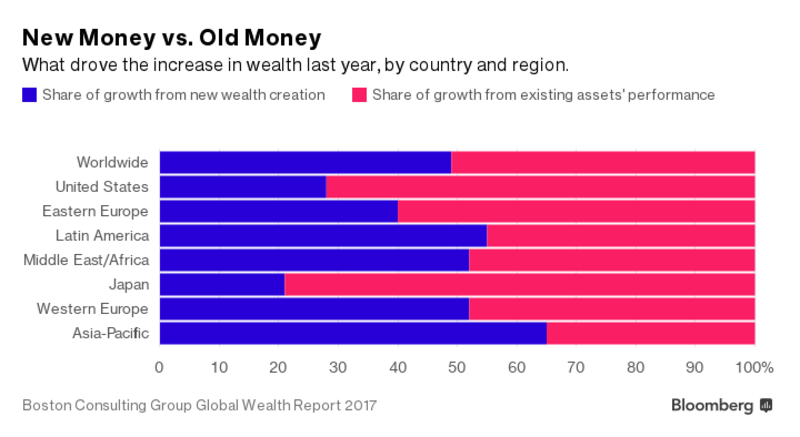 Notice the U.S. share of growth from “new wealth” (productivity) is second smallest behind Japan.   While “existing assets” (investing) is 70% of the growth.

Which kind of growth creates jobs for your tenants?

Also, notice that Asia has the HIGHEST share of “new wealth” creation.  Not a shocker.  That’s where all the manufacturing (and jobs) went.

So what’s an investor to do with all this?

First, don’t be fooled by balance sheet wealth.  Even though we LOVE equity, it can be fickle.

If central banks lose their ability to reflate … or make moves (like raising interest rates and shrinking balance sheets) that constrict credit… equity can disappear fast.

So if you have some excess equity on your balance sheet, you might think about moving it someplace safe.  Otherwise, the market might take it before you can.

Next, remember that productivity (cash flow) is what creates real wealth.  So be sure to index your wealth to real productivity.

Focus on accumulating the efforts of others through rents, interest, and labor.

That is, become a landlord, lender and business owner.

Because just buying low and selling high only accumulates currency … which remains on a slippery slope of long term decline.

And simply holding non-cash-flowing assets on your balance sheet, hoping to see them go “up”, might make you FEEL rich as you admire your net worth …

But, as many discovered in 2008, when the air comes out, the only wealth that’s real is cash flow (productivity).

So the key to real equity isn’t from rising prices, but from increasing cash flows.