By Dani Romero via Yahoo Finance

A key component propping up consumer prices is cooling, but it’s not yet reflected in the government’s inflation measure, according to experts.

The shelter component of the Consumer Price Index — which includes rent and owners’ equivalent of rent — makes up 30% of overall inflation and 40% of core CPI, which excludes food and energy prices.

Real-time data is showing softening rents, but the survey used to determine shelter prices lags current pricing. That disconnect could pose a problem because the Federal Reserve relies on that inflation snapshot to determine the course of future rate hikes.

“You’re probably not going to see a lot of slowing in CPI rents. They visit places once every six months,” Alan Detmeister, a senior economist at UBS, told Yahoo Finance. “Most people are on 12-month leases, so it tends to be a relatively slow-moving component and will probably be very elevated for at least the next year.”

Consumer inflation rose at an 8.2% pace compared to a year ago, and increased 6.6% excluding the volatile food and energy sectors, according to the Consumer Price Index report released on Thursday.

Housing costs, including rent prices, are a major driver of inflation.

Growth in asking rents is cooling rapidly, too, according to CoStar Group Inc. data. Year-over-year growth registered 5.8% in the third quarter, down from 9.2% in the second and 11.4% in the first quarter.

“The fact that we’ve seen these market rates really come down suggests that you’re going to see the CPI rent slowing, but it’s going to take some time because there’s so much increase that’s already occurred in them that you’re not gonna see those CPI rents likely to fall or go negative anytime soon,” Detmeister said. 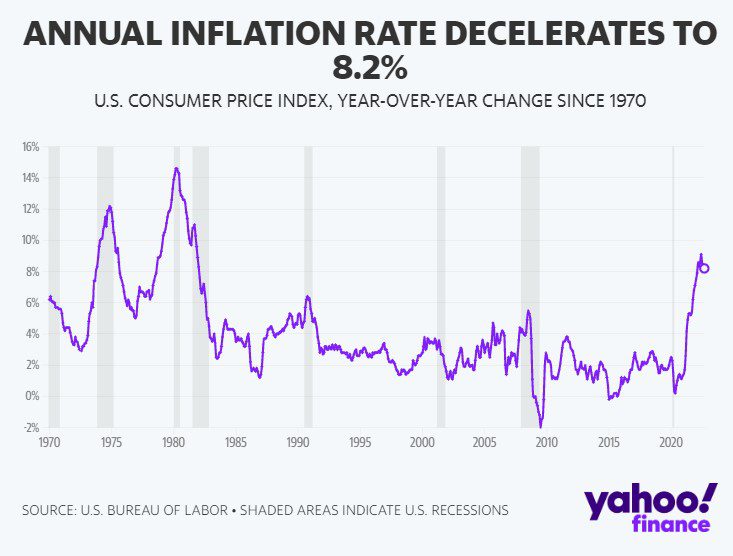 National rental vacancies have also started to increase as the pace of newly delivered units nearly doubled, indicating a change in the supply-and-demand dynamic.

Michael Pugliese, vice president and economist at Wells Fargo, estimates that rent price gains will slow until next year. The deceleration in rental price growth could inch inflation closer to the Federal Reserve’s goal of 2% annual inflation.

“At a high level, the way I think about it is that when you have price increases at such a rapid pace, it’s a sign of supply and demand have gotten a little bit out of whack,” Pugliese said. “And so from the Fed perspective, I think it’s trying to bring those two back into alignment as best they can.”

Wall Street had been hoping to see evidence of inflation cooling, but the latest CPI print further reinforces expectations that the Federal Reserve will continue with higher interest rates hikes in the coming months — even, as some argue, may not be necessary yet.

“The rate of change in rent inflation measured by Zillow…tends to lead the CPI. The lag varies, but assuming the recent relationship holds, it would be reasonable to expect another few months — about three — of big, month-to month CPI rent increases, followed by a clear slowdown,” Ian Shepherdson, chief economist at Pantheon Macroeconomics, wrote in a note. “High rent inflation today does not require further Fed action.”