The TRUTH about the June jobs report …

Of course, real estate investors prefer their tenants actually have jobs, so we agree … any economy creating jobs is preferable to one which isn’t.

Here’s a few of the headlines and some notable excerpts …

Weird.  So it looks like the U.S. is still creating more job seekers than jobs.

So there’s more people back in the game,  but labor force participation is still among the lowest in 40 years.

Okay …  let’s take a breath and digest some of this …

First, these are just macro numbers … but all real estate is local.  So don’t get too happy, sad, or confused.

Also, these numbers are seasonally adjusted (no one knows what that really means) and are frequently revised later (as you can see with the May wage gains).

So don’t get too attached to the numbers either.

Still, the numbers are important for a few reasons …

This sets off a chain reaction

Wall Street’s extended love affair with bond speculation might be coming to an end … because when rates go UP, bond prices go DOWN.

Conversely, when bond prices go down, rates go UP.

And if you go talk to your friendly neighborhood mortgage professional, you’ll discover that mortgage rates very often pivot off ten-year bond yields.

We could go on and on … but you get the idea.

As we’ve been saying for many months, it’s probably a REALLY good idea to carefully review all your debt … and make sure you’re prepared for the potential of rising rates.

The window of opportunity to tighten things up may be closing.  And it’s usually MUCH better to be a lot early than even just a little late.

So that’s some of the macro-picture.

Now let’s dig into the jobs report and see if there’s some intelligence we can use to identify local challenges and opportunities.

We like this chart from the Yahoo Finance article … 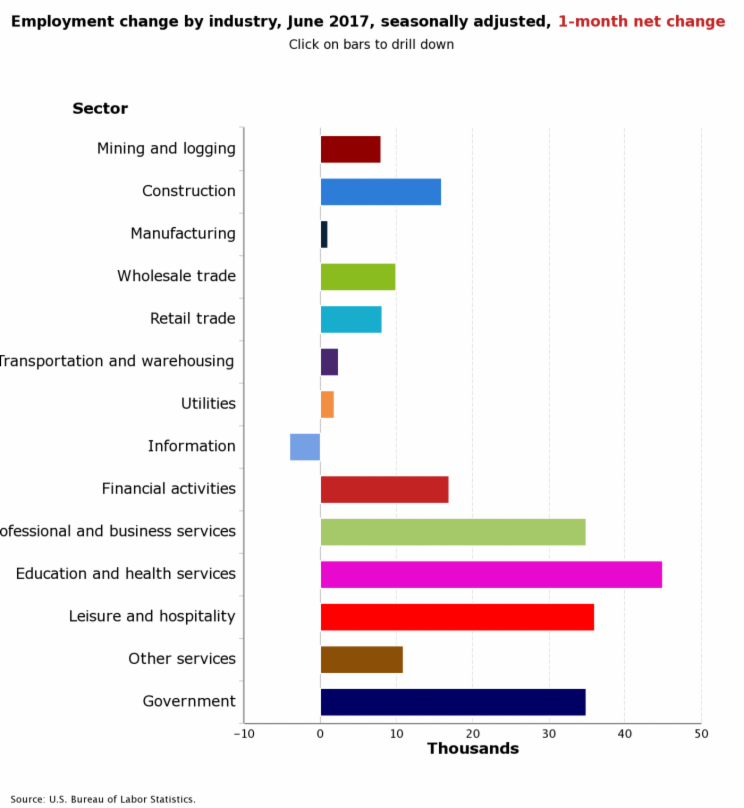 Notice the BIG gainer is Education and Health … followed by a fairly distant Leisure and Hospitaity, which is closely followed by an effective tie for third with Government and Professional and Business Services.

The TINY contributors are (smallest to biggest) … Manufacturing, Transportation and Warehousing, and Utilities.

You can see who the biggest LOSER is … and who’s in the middle.

So what useful insights can we glean from all this?

Big picture, you need to wonder about the REAL strength of an economy which is “growing” in education, healthcare, leisure, hospitality, government, and business services.

Think of it this way …

Sure, they’re growing payroll and overhead.  But who’s bringing in outside revenue?  Who’s actually making things and filling orders?

These are the activities which make a business profitable.

No wonder the U.S. runs a trade deficit.  The economy is largely overhead and consumption.

So be careful about buying into a sustainable growth argument about any country, state, region or business that’s not growing by creating products and selling them.

Everything else are support services which should only grow in SUPPORT of real growth … not in place of it.

With that said, it’s obvious from the chart which sectors have the job growth, so regions strong in those areas are probably positioned to have more demand for real estate.

And while it’s smart to cautious in these markets, there’s nothing wrong with taking advantage of growth in areas heavy in support industries … especially if the region attracts money from outside.

For example, government pulls money in from it’s entire jurisdiction.  So properties near government hubs can do well, even if the real productive engine is located elsewhere.

Mining and Logging is interesting for that reason also.  Those commodities are usually sold outside the region.  So they bring money in from afar.

Meanwhile the jobs are tethered to the geography.  It’s hard to move a forest, natural gas well, or copper mine to China or Mexico.

Also, when it comes to commodity-based real estate investing, you can not only play at the residential and industrial property level … owning the building people live, work and shop in …

… you can actually own the very land that’s producing the commodity.

Leisure and Hospitality businesses located in the right place can also produce jobs and profit locally from prosperity located elsewhere.

If a hotel or resort location has broad and unique appeal, it can pull customers and money in from around the globe.

It’s why we like certain parts of Belize, and Orlando.

The lesson here is to dig past the headline numbers and look for the geographic, demographic, and product niches that are out-performing … or have the potential to.

Then start watching from afar.  When you think you see an opportunity, it’s probably time to go on a field trip and build boots-on-the-ground relationships to help you find and manage that uniquely profitable property.