By Elliott Smith via CNBC

LONDON — The Bank of England on Tuesday announced an expansion of its emergency bond-buying operation as it looks to restore order to the country’s chaotic bond market.

The central bank said it will widen its purchases of U.K. government bonds — known as gilts — to include index-linked gilts from Oct. 11 until Oct. 14. Index-linked gilts are bonds where payouts to bondholders are benchmarked in line with the U.K. retail price index.

The move marks the second expansion of the Bank’s extraordinary rescue package in as many days, after it increased the limit for its daily gilt purchases on Monday ahead of the planned end of the purchase scheme on Friday. 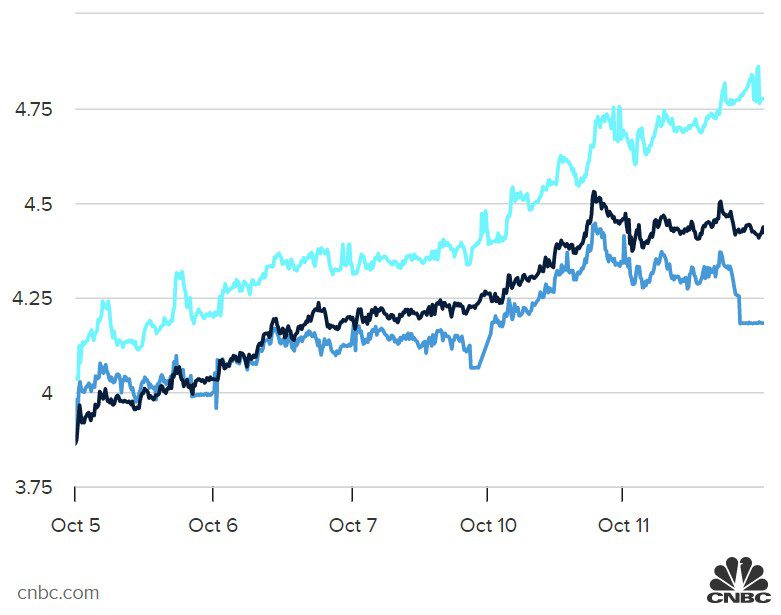 “The beginning of this week has seen a further significant repricing of UK government debt, particularly index-linked gilts. Dysfunction in this market, and the prospect of self-reinforcing ‘fire sale’ dynamics pose a material risk to UK financial stability,” the bank said in a statement Tuesday.

Moves of this magnitude are highly unusual in developed world sovereign bond markets.

“These additional operations will act as a further backstop to restore orderly market conditions by temporarily absorbing selling of index-linked gilts in excess of market intermediation capacity,” the Bank said Tuesday.

“As with the conventional gilt purchase operations, these additional index-linked gilt purchases will be time-limited and fully indemnified by HM Treasury.”

On Monday, the Bank of England set the upper limit of its daily gilt purchases at £10 billion ($11 billion), of which up to £5 billion will be allocated to conventional gilts and £5 billion to index-linked gilts.

The size of auctions will remain under review, the Bank said, and all purchases will be “unwound in a smooth and orderly fashion once risks to market functioning are judged to have subsided.”

The reaction in U.K. bond markets was muted following the announcement. The 10-year gilt yield slipped to 4.426% while the 30-year yield was roughly flat at 4.713%.

The wild moves in bond markets were triggered by Finance Minister Kwasi Kwarteng’s controversial fiscal policy announcements on Sep. 23, which contained large swathes of debt-funded tax cuts as part of the new government’s aim to drive economic growth to 2.5%.

“The U.K. government is in a good position with regards to its net debt to GDP – it’s around 80%. That’s a pretty decent position. What they need to do is explain to investors the credibility behind their economic projections, and to be fair, that’s something well outside the remit of the BOE,” Lawrence said.

Along with concerns over fiscal credibility, which led Moody’s and other credit ratings agencies to revise down their outlook for U.K. sovereign debt, Lawrence suggested that the correlation between U.S. long-dated Treasury yields and U.K. gilts also limits the Bank of England’s reach.

Kwarteng announced Monday that his detailed expansion on the policy statement that spooked markets will now take place on Oct. 31, three weeks before originally scheduled. The government has already been forced to U-turn on some components of its strategy.

Also on Oct. 31, the Bank of England plans to begin its delayed sale of gilts as part of a wider quantitative tightening effort and unwinding of pandemic-era monetary stimulus. The Monetary Policy Committee will not meet again until Nov. 3, after the scheduled recommencement of gilt sales.

Several strategists have attributed the lingering skittishness in bond markets, despite the Bank’s efforts, to the limited timescale of its intervention and the prospect of gilt sales beginning again.

“Taking off the emergency QE band-aid – and replacing it with indirect liquidity support – opens the door to renewed repricing of UK assets while (hopefully) preserving BoE credibility and preventing a return of disorderly conditions,” Krishna Guha, vice-chairman of Evercore ISI, said in a research note Monday night.

“We continue to think that the BoE likely will have to reschedule or reprofile the QT program it has promised to resume.”

Guha said a key risk now is that Kwarteng’s expanded budget statement falls short and kicks off a fresh wave of selling pressure in U.K. bonds.

“Whether the government succeeds or fails in shoring up fiscal credibility will define the trade-off facing the Bank,” he said.

“If it fails, the market rate curve will move up further, and the Bank will face a near-impossible trade-off between validating these expectations and crushing the economy and housing market, or trying to deliver less than the market expects, and crashing sterling and risking inflation expectations.”