Where people are moving and why …

Real estate investing scientists are avid researchers of the migratory patterns of Homo americanus.After all, population affects demand … and monitoring supply, demand, and capacity to pay is an important part of strategic geographic market selection.

So we’re excited because it’s that time of year when all kinds of reports start coming out about the year past … and we can geek out on data and analysis.

North American Moving Service recently released their report on which states experienced the most inbound and outbound migration.

Of course, strategic investing is more than just chasing trends reflected by data.

It’s about digging into the why behind what happened … and infer what might happen in the future … so you can get in front of a trend and ride the wave. 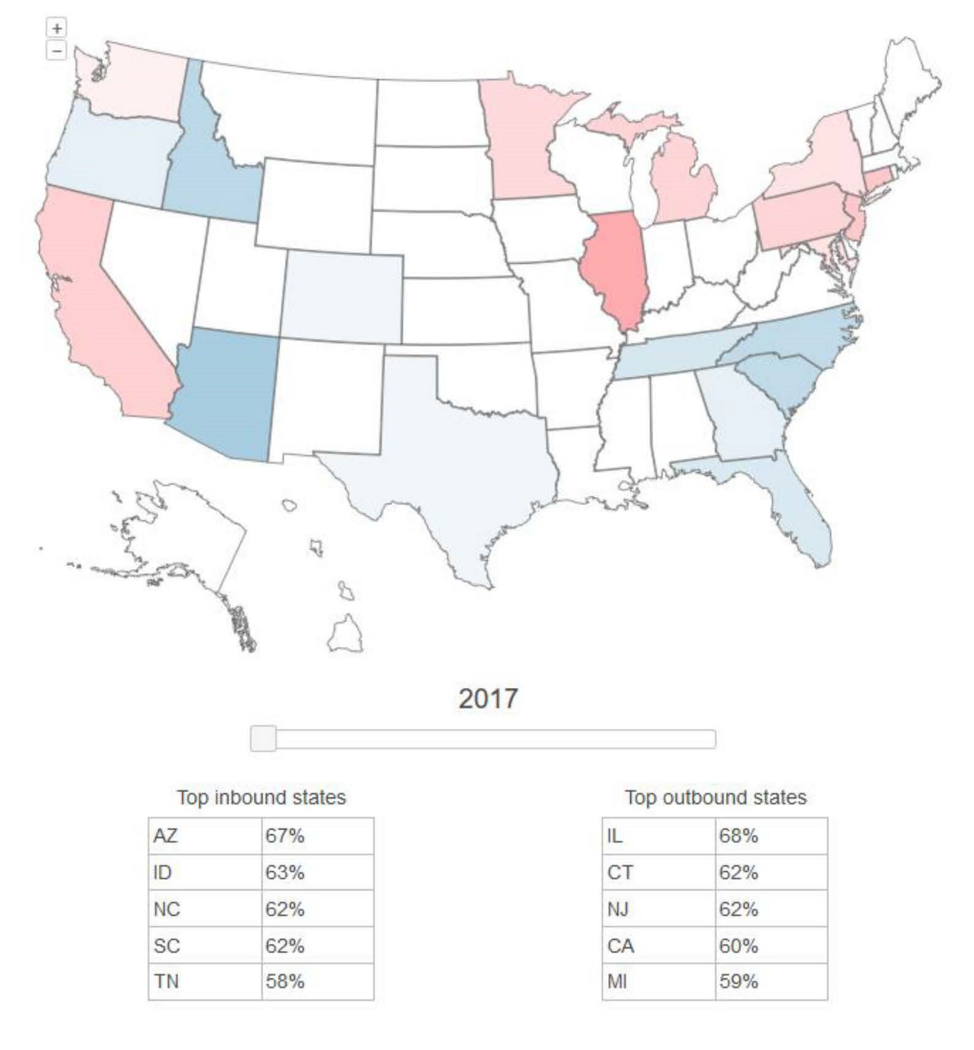 If you know anything about any of these markets, the map and lists might already be talking to you.

Consider that actions … in this case, people moving … are motivated by running towards and getting away.  It’s wise to look at both.

Avoiding problems is just as important as chasing opportunities.  Losses offset wins.  So we study falling markets as well as rising ones.

We’ve previously discussed the mess in Illinois, which you can read here.

And while the above map is just an overview of the information provided in the complete North American report, it’s enough to think about what these migratory patterns might be indicating.

For additional color, check out a similar report from United Van Lines.  You’ll note that their top and bottom states vary from North American’s.

Also, the United Van Lines map is fun because it’s interactive.  You can look at moving patterns all the way back to 1979.

U-Haul also produces a similar report … and their results also varies from the others.

So why the variances?

Perhaps obviously, each company is reporting its own stats … and not every company is equally represented in every state.

Remember: one point of view never tells the whole story.  Always look for supporting and differing perspectives, and corroborating and disagreeing data.

Once the data’s on the table, you can start to dig in and look for commonalities and trends … clues about what’s happening, where, and why, so you can be more strategic than the lazy investor.

Of course, there’s a danger in over-analysis, so don’t get lost in the weeds and forget to invest.

It takes assets, not ideas, on your balance sheet to build wealth. Think of it as “investigation for effective action.”

Remember, you’re not looking for the perfect market or perfect property.  There’s no such thing.

You want to find a good market, with good fundamentals, and a great team.

When it comes to migration, our goal is to understand the motives behind the movers … so we can anticipate whether trends will continue, change direction, or otherwise shift.

Because when people leave, they take demand for housing with them.  Lower demand could lead to lower rents and prices.

If the phenomenon is only temporary, it might be a great time to grab some bargains.

But if the reasons people are moving away are permanent or worsening, you might be buying into a downward trend … that could be unprofitable and expensive to escape.

Of course, there are lots of reasons people move to and from places.  Some are non-financial such as family, friends, lifestyle, and weather.

But financial considerations are also powerful motivators to change locations.  A job, the cost of living, and taxes are typically top of the list.

While things like family, friends, hobbies, and weather preferences are all highly personal and subjective …

… things like job growth, cost of living, and taxes are all relatively objective.  They’re easy to identify and measure.

So it’s a useful exercise to evaluate the locations at the top of the list and see what they have in common in these terms.

Then do the same for those on the bottom, and it may start to paint a picture.

Now this is a newsletter and not a seminar, so we’ll let you dig in and do the research if you’re so inclined.

The great news is this is the information age, so there’s terabytes of data available.

But to speed you along, here’s some resources … and some additional food for thought …

Taxes have been in the news quite a bit, and it’s that time of year when people are reflecting on the past year … and settling up with taxing authorities.

If Christmas is the most wonderful time of the year, tax time is probably quite a bit further down the list.  It’s Uncle Sam’s turn to open his presents … from you.

To see which states are naughty and nice, Wallet Hub publishes a ranking of states by total tax burden here.

Then keep in mind … information workers and retired boomers are largely free to live anywhere.  Total tax burdens could be an important consideration where they go … or leave.

So when you look at the states with people moving in and out, and compare it to the states in light of their total tax burden … you might find a correlation which could infer taxes are a motivator for moving.

Cost of Living and Affordability

While taxes are an important consideration, we’re guessing even more important is overall cost of living and affordability.

US News puts out an analysis of states by affordability.  The 2017 version isn’t out yet, but here’s the 2016 version.

Like taxes, people whose incomes aren’t tied to a specific geography, might consider making a move to a more affordable area.

Of course, if you study some of the rent-to-price ratios of various locations, you’ll find some of the best residential rental property returns come from affordable areas.

Housing health is really a direct reflection of jobs.  While academic politicians think housing creates jobs, it’s really the other way around.

So while people might want to live in the country, on the beach, or on a hilltop … most choose to live where they can find work.

Keep in mind, many characteristics of a locality are affected by state-wide considerations such as tax rates, weather, and regulatory climate … while jobs are local.

While real estate investing isn’t as intellectually demanding as many types of investing (that’s why it’s perfect for us!) … it’s more than just picking out a pretty property with nice curb appeal and putting up a For Rent sign.

Each property sits in a market … and neighborhoods, cities, counties, and states all have their own appeal … or lack thereof.

Migration patterns can help you see a bigger trend so you can pick markets likely to rise with the tide of demand.