By Janna Herron via Yahoo Money

Mortgage rates jumped more than a quarter point this week and remain at the highest level in 14 years, offering no relief to sidelined homebuyers.

The average rate on the 30-year fixed mortgage increased to 6.29% from 6.02% last week, according to Freddie Mac, marking the highest point since the last week of October 2008. Rates are more than 3 percentage points higher than at the start of the year.

Rapidly rising rates this year have only made what was an unaffordable housing market for many even worse, forcing those would-be buyers to pause their purchasing plans. Those who remain, though, are finding it easier to negotiate with sellers than when the year began.

“For buyers watching their take-home pay shrink due to higher prices, and shopping budgets diminish due to rising rates, today’s housing market remains highly unaffordable,” George Ratiu, Realtor.com’s manager of economic research, said in an email to press. “In many locations, price cuts may be the only viable option to restore housing balance and affordability.” 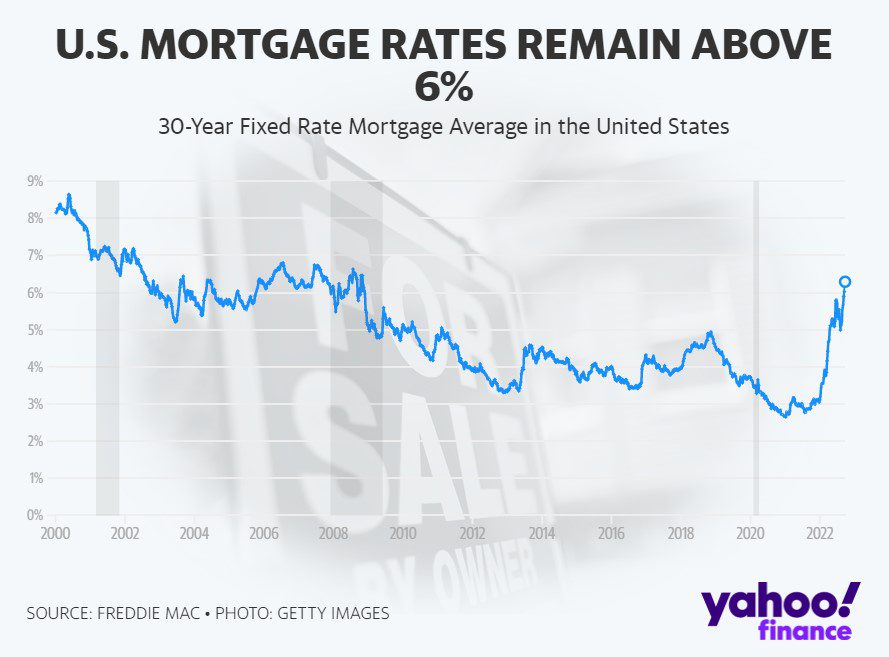 Why did mortgage rates increase?

The jump in the 30-year rate came as the Federal Reserve reiterated its steadfast commitment to rein in runaway prices on Wednesday after it increased its short-term benchmark rate by three-quarters of a point as expected.

The yield on the 10-year Treasury, which fixed mortgage rates tend to track, jumped to the highest level since 2011 on those inflation-fighting expectations. Mortgage rates soon followed.

The Fed also started to reduce the amount of mortgage-backed securities it holds on its balance sheet this month, according to Ratiu.

“These actions will cause mortgage rates to continue rising until inflation shows signs of more significant moderation,” Ratiu wrote.

Since mortgage rates started their rapid ascent in earnest in March, buyers have been flowing out the exits.

The volume of mortgage applications for purchases is down 30% year over year, according to the latest data from the Mortgage Bankers Association, even though the activity registered a small seasonally adjusted 1% uptick week over week.

Sales of previously owned homes also declined for the seventh straight month in August, according to the National Association of Realtors, bringing down the median listing price for the second consecutive month. The price stood at $389,500 in August, down $24,000 from the record high of $413,800 in June — but still 7.7% higher than a year ago.

The monthly payment of the median-priced home at the 30-year rate is about $900 higher than a year ago, according to Realtor.com, or nearly $11,000 more per year.

“Sixty percent of my clients who were pre-approved a few months back, they want to wait to buy a home,” Scott Sheldon, a California branch manager for New American Funding, a mortgage lender, told Yahoo Money. “Those are all the folks who were buying with 10% or less down, so I can’t say I can blame them.”

Sellers lose some of their negotiating power

Sellers have noticed the abrupt change in their market standing.

Approximately 11% of homes for sale had a price cut last month, Realtor.com data showed, up 19.4% year over year and close to averages from 2017 to 2019. Fewer homes sold above list price in August, according to a separate study by Redfin, with 35% going for above asking, down from 49% a year ago.

Home builders, too, have been offering concessions as the buyer pool shrinks.

Nearly 25% of builders reported reducing their price this month, up from 19% in August, according to a monthly survey and index from the National Association of Home Builders, while half said they offered mortgage rate buy-downs and free amenities, among other inducements to close sales.

That’s some relief to buyers still in the market, Sheldon said, who are using their newfound negotiating power to get price reductions that offset the recent rise in rates.

“Buyers who can handle the storm of temporary higher rates are going to do really well on their house. Every purchase we’re doing has a price reduction or price incentive,” Sheldon said.

But “it’s still challenging,” he added.

“Everyone is paying points, so closing costs are not 2% to 2.5% of the purchase price anymore, they’re 3% to 3.5%. That’s additional money they need to bring to the table to get the rate they want.”