By Julianne Geiger via OilPrice.com

Saudi Arabia has agreed to cut its production for November by 526,000 bpd, from its current quota of 11.004 million bpd, according to data provided by OPEC following its Wednesday meeting to set new production targets.

OPEC+ decided to cut its November production quotas by 2 million bpd, according to the Wednesday press release, “In light of the uncertainty that surrounds the global economic and oil market outlooks, and the need to enhance the long-term guidance for the oil market, and in line with the successful approach of being proactive, and preemptive, which has been consistently adopted by OPEC and Non-OPEC Participating Countries in the Declaration of Cooperation.”

The group also extended the compensation period to the end of March 2023 for those not meeting their quotas.

Saudi Arabia’s actual September production came in at 10.904, according to OPEC’s most recent Monthly Oil Market Report—making the Kingdom one of the few OPEC+ members that will realize a nearly complete cut.

Other OPEC producers, such as Angola, Congo, Equatorial Guinea, and Nigeria, are already producing below their reduced November quotas, and as such, will not be required to cut production further. 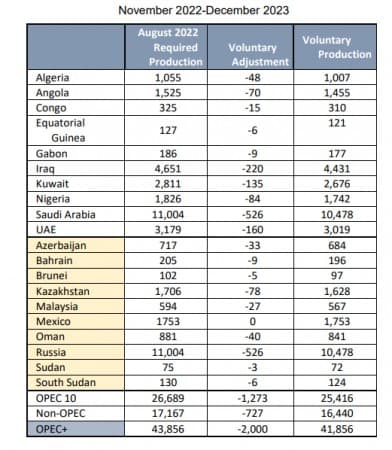 Energy is something that can never be attended to in short-term tweaks and moves, Saudi Arabia’s Energy Minister, Prince Abdulaziz bin Salman said at the presser following the meeting, in a seeming jab to U.S. President’s SPR releases and discussions about restricting refined product exports as a means to control prices at the pump.

In a rather surprising move, an oil price chart was shown during the meeting despite the group’s reluctance to discuss the oil market in terms of prices, to tout what OPEC+ has done so far. “Ask yourself the question: who delivered?” the Prince prompted. 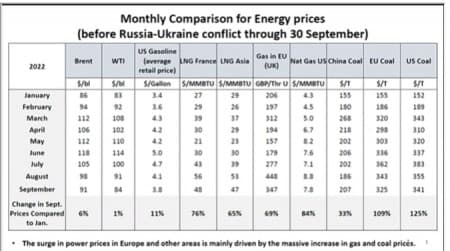 When asked if OPEC was using energy as a weapon, “Show me where is the act of beligerance, period,” the Prince quipped.

The full group will hold its next meeting on December 4, 2022.