Newsfeed: US Homebuilders Abandon Single-Families In June As They Brace For Rate Shock

With homebuilder sentiment collapsing at its fastest rate on record in July (ex-COVID lockdowns), one could be forgiven for thinking these same homebuilders would have been slowing building starts and permit applications in June, but analysts expected improvement in June from May’s ugliness. 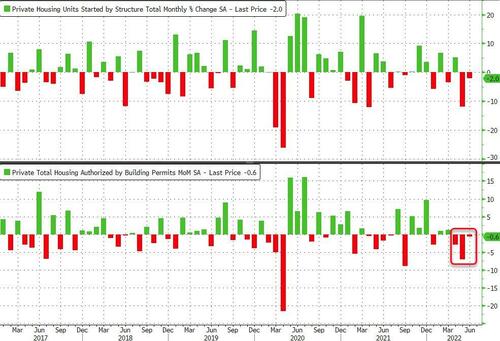 This is the third straight monthly decline in Permits (forward-looking).

But the headline print hides the real details – homebuilders are shifting their attention completely away from single-family construction and focusing on renter-nation.

The same pattern was seen in starts.

Finally, judging by the homebuilder sentiment (for July), permits are set to fall considerably further…

And that means less single-family housing starts… and worsening inventory issues (so demand is plunging, but supply is plunging even faster)…

Presumably – as homebuilder sentiment signaled – the builders are abandoning single-family buyers in anticipation of the impact of soaring rates on buying demand; and instead focusing on ‘renter nation’, and the end of The American Dream.

That’s quite a box you have got yourself into Mr.Powell.