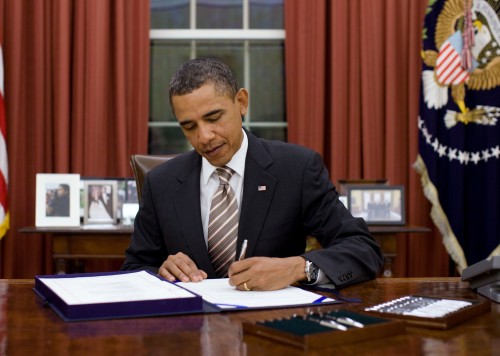 Speaking at Julius Caesar’s funeral, Shakespeare’s Marc Antony gave one of the most iconic eulogies in literary history …

“Friends, Romans, countrymen, lend me your ears;  I come to bury Caesar, not to praise him.  The evil that men do lives after them;  The good is oft interred with their bones …”

Now here we are … at the end of the Obama years … and time will tell how history will remember the 44th President of the United States.

From what we’ve seen, it seems that President Obama’s “signature” achievement, Obamacare, could likely end up undergoing a major overhaul in 2017 … maybe even a complete repealment and replacement … at least if one is to believe all of the campaign rhetoric of soon-to-be President Trump.

Frankly, we’re HAPPY all the attention is on Obamacare. Hopefully, it means no one will mess with what we think will go down as President Obama’s REAL signature achievement …

More specifically, the provision of the JOBS Act which lifted the restrictions on soliciting investors into private placements.

When the first set of regulations was released at the end of 2013, we spoke on this topic at the New Orleans Investment Conference.

We’re doing our best to get the word out so ambitious real estate entrepreneurs can get in on the action.  But of course, these things move at their own speed.

For some, it’s forgetfully slow.  For others, it’s frighteningly fast.  It just depends on how you respond to opportunity.

If you take a “wait and see” approach, you’re bored waiting for the action to start.

But if you have a “plan and do” personality, you’ve been madly paddling into position so you can ride the wave as it breaks.

Personally, we think “Plan and Do” is better than “Wait and See.”

You can read the report for a better understanding of why the JOBS Act is so huge for real estate investors … and ultimately for all kinds of investors.

The short of it is that U.S. securities laws have largely served to protect the market-making monopoly of Wall Street … and herd Main Street investors into the paper-asset casinos.

Read that again and let it soak in.

By making it very dangerous and expensive for purveyors of private investment opportunities … like folks putting a group together to buy an apartment building or hotel … the old law discouraged real estate entrepreneurs from offering those deals to Main Street investors.  Those deals went to Wall Street banks or a select few insiders.

So as a Main Street investor, if you wanted to get in on real estate, you either had to figure out how to do it yourself, or have an inside relationship with someone who had deals … or do a Wall Street version of real estate like REITs or mortgage-backed securities.

But now, purveyors of private placements can advertise their deals directly to Main Street investors … completely bypassing Wall Street. We like it.

Some entrepreneurs are investing a lot of time and money into building special market-making software called crowdfunding platforms.

Those take a lot of money to build … and there’s a fair amount of regulations you need to contend with.  Being a crowdfunding entrepreneur is not for the light of wallet or faint of heart.

And at the end of the day, to make crowdfunding work, you still need deal flow and a crowd.  Those cost money to build, too.

Somebody will probably figure how to become the Amazon.com of real estate crowdfunding.  But remember how much time and money Amazon spent to get there?  Yikes.

For street rats like us, we think there’s still tons of money to be made leveraging the new law into taking good old-fashioned syndication to the next level.

In fact, we’d prefer it that way.  Think of all the problems created by too much concentration of power in corporations and governments.

Sure, we understand the benefits of economies of scale.  But when things get big, accountants and politicians move in and manage for numbers … forgetting the human element.

And if we’re all doing enough Main Street business well, it slows down how fast someone can build a new monopoly that forgets the people.

When corporations get big, they lobby for laws which are used to protect their monopolies and crush competition.  That’s bad.

So when we look back on the Obama years, we’re happy for the JOBS Act … and the freedom to do business Main Street to Main Street … completely circumventing Wall Street.

Of course, not using a freedom is almost like not having it at all.  So we hope LOTS of people will get on board and keep driving the Main Street to Main Street revolution.

If YOU want to get in on the action, come learn the Secrets of Successful Syndication on March 3-4 in Dallas, Texas.  Not only will you learn, but you’ll meet lots of people who are out there doing it successfully already. Why not join them?

Remember, Plan and Do is better than Wait and See.