Newsfeed: Gold Is The Geopolitical Hedge Of First Resort, Goldman Sees $2150 Within 12 Months

Geopolitical risks are on the rise in a system with no slack, and that, according to Goldman Sachs commodities research chief, Jeffrey Currie, strengthens his thesis that the case for commodities has rarely been stronger.

While many commodities are fundamentally exposed to events in Ukraine, believes oil and gold provide the cleanest hedges for this geopolitical risk.

First, there is clear upside skew in oil prices on both a tactical and strategic basis, with any geopolitical risk premia coming in on top of the tightest inventory levels in decades, low spare capacity and a much less elastic shale sector.

If the oil market is forced into balancing itself by 2022 – a year sooner than our base case of $105/bbl prices- our modeling suggests the oil price will have to hit $125/bbl to balance almost entirely through demand destruction. The key point of relief to such a bullish set up in oil would be, in our view, an Iran deal; however, the geopolitical hurdles to this appear to be stubbornly high. 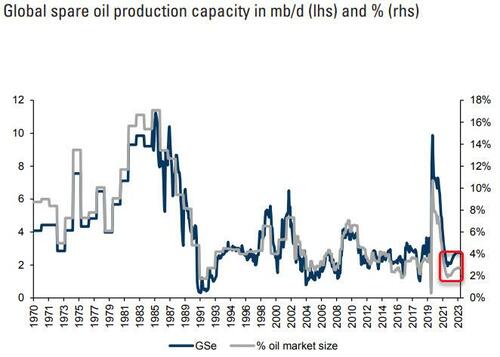 In the same vein, Currie notes that it is clear that as tension in the region increases, gold is acting as the currency of last resort. As we noted before gold tends to respond to those geopolitical risks which can directly affect the US. We think that the ongoing energy crisis and above target US inflation means that any disruption to commodity flows from Russia can lead to greater concern of US inflation overshoot and subsequent hard landing.

A common concern for gold in 2022 is looming Fed hikes and the potential for higher long term real rates.

However, we find that historically, gold tends to increase during rate hike periods when gold’s negative correlation with long term real rates also tends to break down. This is already happening with gold displaying resilience to the most recent increase in US 10 year real rates. In our previous research, we argued that this has to do with the fact that the rate hikes themselves can lead to fears of a growth slowdown and recession and therefore boost demand for safe haven assets, such as gold. This means if inflation fails to slow down in the second half of 2022 and the Fed is forced to hike more than currently expected, gold should be resilient as this would increase fears of a potential recession.

Gold is beginning to disconnect from real rates… 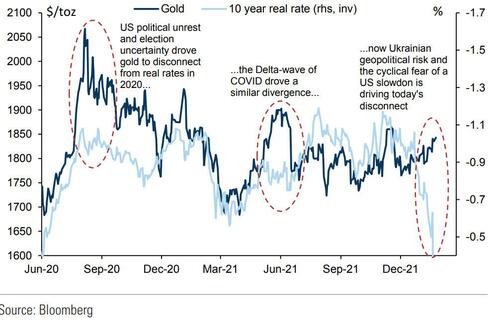 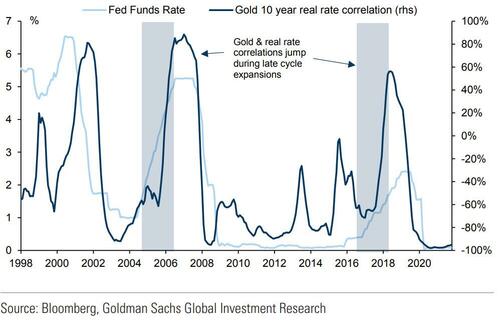 In our previous research we found that there is a large disparity in the gold price’s response to geopolitical shocks with strong price increases following 9/11 and the 2003 Gulf War and practically no response to the Crimea annexation in 2014. The common pattern we see is that geopolitical events with direct US involvement tend to have a much bigger positive effect on gold. 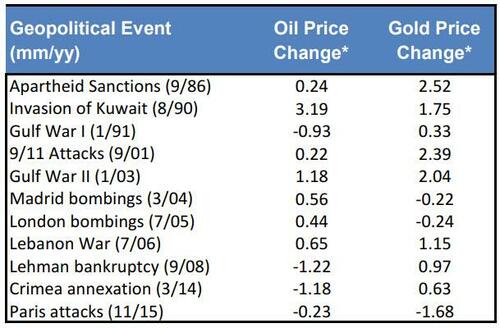 This may be due to the fact that the USD itself often acts as safe haven when tensions arise in other parts of the world. But when the US itself is affected, investors go into gold as a hedge of last resort.

And crucially, Goldman believes that the ongoing energy crisis and above target US inflation means that any disruption to commodity flows from Russia can lead to greater concern of US inflation overshoot and subsequent hard landing… and therefore is directly affecting US.

One recent question that has arisen is the choice of ‘hedging’ between gold and bitcoin.

In their view, many of the headwinds to gold are starting to reverse in 2022. Today, the global growth-inflation mix is markedly different. While there is not yet talk of recession, our economists forecast a material deceleration in US growth, while the imminent prospect of a new hiking cycle is leading to a risk-off environment across long duration asset classes.

Indeed, risk sentiment has begun to deteriorate, while our Portfolio strategists see a challenging growth inflation mix keeping volatility elevated near term. It is important to remember that risk-aversion is a major driver of investment interest in gold vs assets such as equities and, to an even larger extent vs Bitcoin.

In our view, gold is a risk-off inflation hedge while Bitcoin is a risk-on inflation hedge. For investors looking for a way to hedge their portfolios from risks of a growth-slowdown and falling valuations, we believe a long gold position would be more effective in the current macro environment.

Further, despite the rise in total market capitalization and liquidity, Bitcoin’s volatility has shown no downward trend… 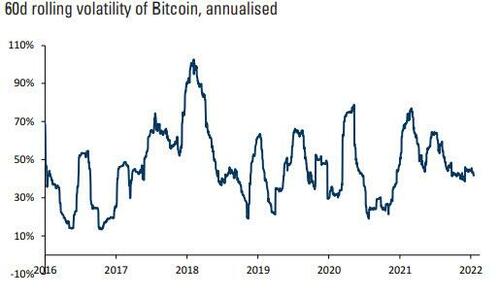 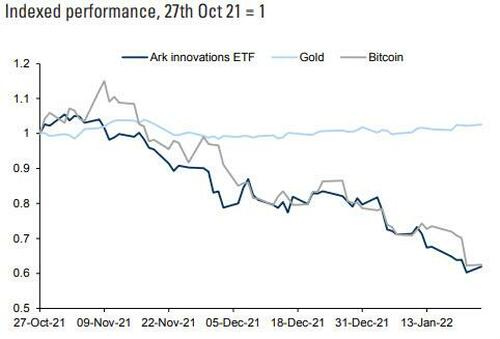 As we have often said, we believe this is driven by crypto’s lack of use beyond a digital store of value, indicating to us that it is still too early for crypto to compete with gold or the dollar for defensive asset investment flows.

Goldman concludes by upgrading their gold forecast and launching a long gold trading recommendation: In our framework, two of the most important drivers of gold are ‘Fear‘ (a driver of investment demand) and ‘Wealth’ (a driver of EM purchasing power). While US real rates are often a good barometer of Fear, during periods of monetary stimulus, their signaling power breaks in a late cycle environment. Instead, we find that in that environment the market’s assessment of recession risk becomes a better barometer of Fear. Based on the expected slowdown in the US economy and the increase in recession concerns, the build in gold ETFs should increase to an annual pace of 300 tonnes by end of 2022. This, combined with a 10% forecasted increase in EM dollar nominal GDP, points to a gold price of $2,150/toz in 12 months’ time, which is now our new target. We lower our 3m forecast to $1950 from $2000/toz and raise our 6m forecast to $2050/toz. We also launch a long Dec 2022 gold COMEX futures recommendation.