Newsfeed: Yahoo Finance US home price growth stalls in the final month of 2021

Home price growth in the U.S. paused in the final month of 2021, but the full year logged in record gains.

“For the year, the National Composite Index recorded a gain of 18.8%. This is the highest calendar year increase in 34 years of data, and substantially ahead of 2020’s 10.4% gain,” said Craig J. Lazzara, managing director and global head of index investment strategy at S&P DJI, in a statement. “The 10- and 20-City Composites rose 17.0% and 18.6%, respectively — a record for the 20-City Composite, and the second-best year ever for the 10-City Composite.” 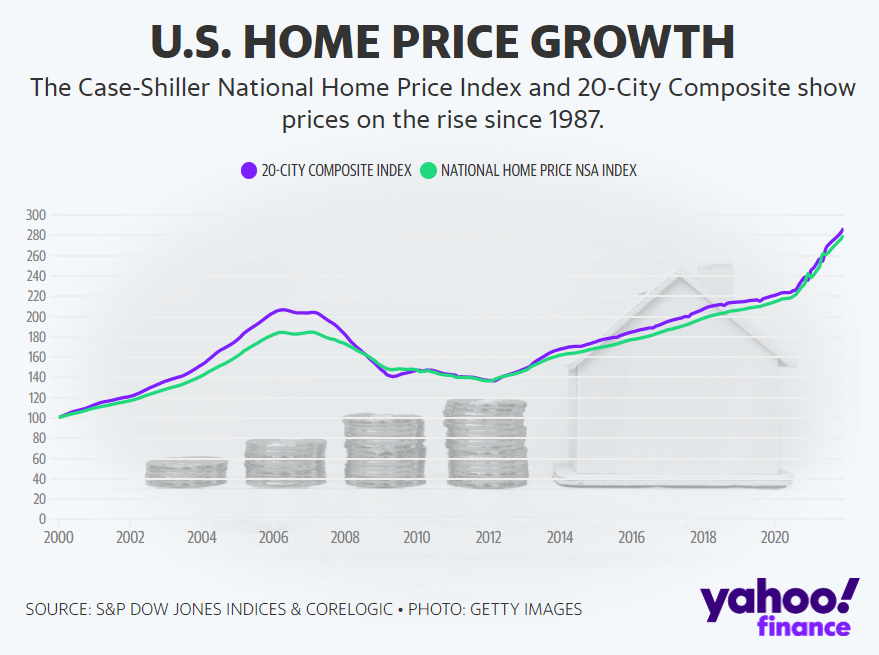 Once again, Phoenix led the 20-City Composite by posting a 32.5% annual gain. The city has led that index for 31 straight months. Two cities in Florida, Tampa and Miami, followed by recording a 29.4% and 27.3% gain, respectively.

“We continue to see very strong growth at the city level. All 20 cities saw price increases in 2021, and prices in all 20 are at their all-time highs,” said Lazzara. “December’s price increase ranked in the top quintile of historical experience for 19 cities, and in the top decile for 16 of them.”

The results were not very surprising, since the data is a lagging indicator. Last week the National Association of Realtors (NAR) reported that the median existing-home price for all housing types in January was $350,300, up 15.4% from $303,600 in January 2021, as prices rose in each region. Home prices were driven up by sales of more expensive homes priced above $500,000.

“The Case-Shiller data are less volatile, in part because they are based on three-month moving averages, while the NAR data are not smoothed. But the message from both series is clear; home prices are rising at an ultimately unsustainable pace,” said Pantheon Macroeconomics in a research note prior to the results. “They are propelled by record-low inventory, which shows no sign of rising.”

“A marked change may be ahead for [home price] growth as rising mortgage rates eat into homebuyer purchasing power. Mortgage and other long-term rates, which had risen only gradually since August, abruptly began a steady climb in late December 2021 that continued through the most recent week,” said Realtor.com Chief Economist Danielle Hale in a statement prior to the results. “Indeed, while typical asking prices continue to accelerate, the pace of median sales price growth has slowed, signaling a potential gap between what buyers are willing and able to pay and what sellers are hoping to net.“

Last week, mortgage rates were inching near 4%. The rate on the 30-year fixed home loan, the most common mortgage, hit 3.92% this week, the highest since March 2019, according to Freddie Mac. The next read on rates will be on Thursday.

“The surge in mortgage rates is likely to take a bite out of the demand for housing, mostly among first-time buyers and those with limited budgets,” said CoreLogic Deputy Chief Economist Selma Hepp in a statement prior to the results. “Nevertheless, with demand remaining considerably beyond the available inventory, the pressure on home prices will remain strong, particularly as potential buyers fear further increases in mortgage rates.”