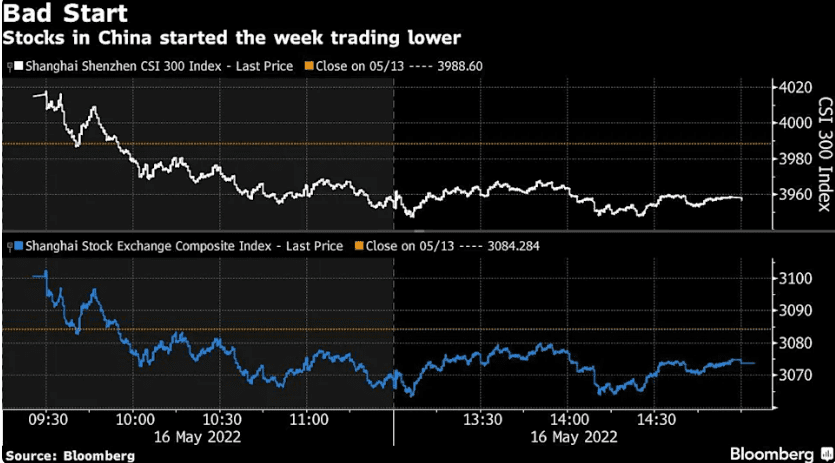 (Bloomberg) — Fresh signs that major economies are slowing even as prices shoot higher cast a shadow over a nascent risk rally in global markets, just hours into the start of the new trading week.Equities reversed course and came off highs after Chinese economic data released Monday showed a sharp contraction as Covid lockdowns stung. Wheat jumped after India restricted exports, adding to broader commodity price pressure.In Japan, producer prices advanced at a double-digit pace for the first time in more than four decades. South Korean bonds fell after the central bank’s governor said a big interest rate-hike couldn’t be ruled out ahead.

Warnings about the fallout from faster inflation have grown louder. Bond market veteran Mohamed El-Erian said stagflation is the base line scenario for the US economy. Goldman Sachs Senior Chairman Lloyd Blankfein said a recession there is a “very, very high risk.” Analysts at the US bank have shifted their preference to better-rated Asian bonds over high-yield notes, citing concerns about headwinds for the global economy.

“The acceleration of the market pullback seems to indicate that investors are starting to anticipate a ‘hard-landing’ of the global economy,” said Charles-Henry Monchau, chief investment officer at Banque Syz in Geneva. “They fear that central banks will fail to tame inflation without triggering a recession or sharp economic downturn.”

Here’s what other market participants are saying:

“The broad-based recession talk is the major catalyzer,” said Ipek Ozkardeskaya, a senior analyst at Swissquote. “Activity in US and European futures hint that Friday’s rebound was certainly nothing more than a dead-cat bounce.”

“In times like this, I would be steering away from rate-sensitive growth stocks, clearly, and stay with price makers, consumer staples and companies that generally control the means of production,” said Justin Tang, head of research at United First Partners.

The data in China were “quite worrying,” Stephane Monier, chief investment officer at Banque Lombard Odier, said on Bloomberg TV. “In terms of investment for China, we have reduced our exposure in terms of fixed income and, more importantly, it is possible that the renminbi will reach 7 against the dollar at the end of the year.”

“New shocks to global growth have led markets,” Barclays analysts including Themistoklis Fiotakis in a note to clients. “The China lockdown and the risk of a natural gas stand-off between Europe and Russia can potentially derail the closure of the activity gap between US and the rest of the world. These risks are becoming increasingly persistent.”

“The latest figures from China were notably weaker than expected, showing the impact of lockdowns was much bigger than markets had anticipated,” said Tomo Kinoshita, global market strategist at Invesco Asset Management. “We will have to see whether this will only affect China’s domestic demand or will have spill-over effects to other countries. That’s going to be a major focus for markets.”