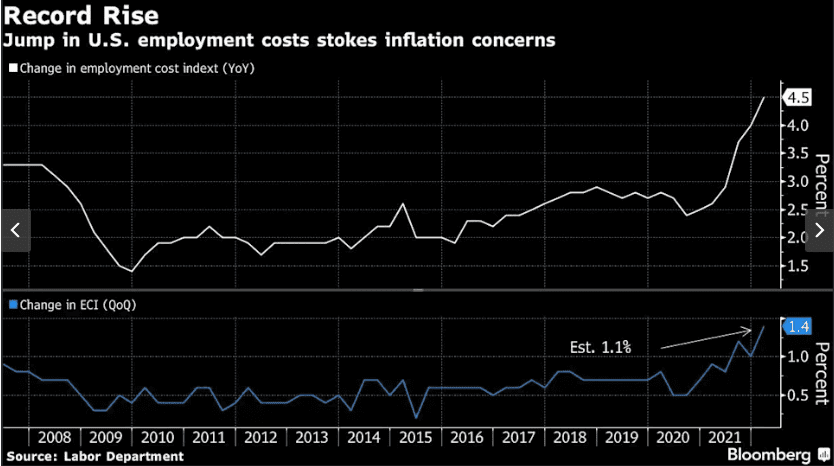 (Bloomberg) — Jerome Powell doesn’t like to bless bets in financial markets, but he could shift the needle this week on how high investors expect the Federal Reserve to raise interest rates to cool overheated prices.

The Fed chair and his colleagues want to lift rates expeditiously to a neutral level this year that neither stimulates nor restrains growth — around 2.5% — and then slow the pace of tightening.

But in crises, central banks that pause typically lose as the forces they’re battling — be it spreading financial panic or broadening inflation — gain more momentum.

“You don’t pause along the way” in an inflation fight, said former Fed Governor Laurence Meyer who now runs policy analysis firm LH Meyer. “You do look around, but there is an urgency of moving beyond” a neutral rate of interest.

U.S. central bankers don’t want to trigger a recession and Powell has voiced confidence in the Fed’s ability to pull off a soft landing that brings inflation toward its 2% target without stalling the economy.

But he has also prioritized price stability. “If we determine that we need to tighten beyond common measures of neutral and into a more restrictive stance, we will do that,” Powell said March 21.

He publicly backed front-loading policy tightening in April 21 remarks that helped cement expectations for a half-point hike when officials conclude their two-day meeting Wednesday, followed by at least that large a move in June.

Minutes of their March gathering also signaled the committee will likely agree to start shrinking their $9 trillion balance-sheet in May, quickly moving to a maximum runoff pace of $95 billion a month.

Having already provided a lot of clues for what to expect, most of the new information will come via Powell’s post-meeting press conference at 2:30 p.m. in Washington — his first to be held in-person since the pandemic began.

Powell will have just spent two days gauging the mood of his colleagues. If he comes out and signals policy may require a more restrictive stance — meaning above its neutral setting — it would be a significant shift. The market consensus currently shows rates peaking above 3.4%, but that is above the median Fed forecast that was updated in March.

“The Fed has very little room to under-deliver” on policy restraint, said Ed Al-Hussainy, global rates strategist at Columbia Threadneedle. “They have to say they’re willing to risk tipping the economy into recession to signal credibility on inflation.”

Fed forecasts from March show five officials projecting rates above 3% in 2023 and 2024 to get inflation moving back toward their target.

That was more hawkish than the median official, who saw rates at 2.8% in both years, but it’s plausible that more policy makers have joined those ranks given incoming economic data.

Economists at Deutsche Bank AG argue the Fed will have to raise rates much more aggressively — well into the 5% or 6% range — to curb inflation, leading to a deep recession next year.

Capacity utilization is rising, and capital spending is holding up. The employment cost index, an important indicator of total compensation costs watched by Powell, rose 4.5% from a year earlier, a gain that is likely to underpin demand and possibly sustain inflation pressures.

And the jobs market remains tight. Payrolls rose by 385,000 in April, according to the median estimate in a Bloomberg News survey. The monthly employment report will be published May 6.

“The recovery continues to be robust,” Visa Inc. Chairman and Chief Executive Alfred Kelly told analysts April 26. “At this stage in terms of volumes, we have seen no noticeable impact due to inflation, supply chain issues or the war in Ukraine.”

For central bankers this is all good news except for one thing: It has been accompanied by rising inflation rates and a drift up in some longer-run inflation expectations measures.

The Fed’s preferred price measure rose 6.6% in March, more than three times their goal. A University of Michigan survey of the expected change in prices for the next 5-10 years has averaged 3% for the past 12 months versus 2.7% for the last expansion. And a New York Fed survey of three-year-ahead inflation expectations averaged 3.6% in the first quarter versus 2.9% in the first quarter of 2019.

“All of the measures are telling us underlying inflation is not where it should be,” said Conrad DeQuadros, senior economic adviser at Brean Capital. “The eventual point they need to get to rein in inflation is probably going to have to be” more restrictive than their current estimates of 2.8%.

The Fed’s narrative about moving cautiously once they get rates up to around 2.5% also reflects their high uncertainty.

Russia’s invasion of Ukraine and China’s round of virus lockdowns could both slow global growth and further snarl supply chains, creating more scarcity and higher prices. At the same time, slowing growth in China and Europe could create disinflationary forces.

Anna Wong, the chief U.S. economist for Bloomberg Economics, said just a 4% decline in the level of GDP in China can lead to a 30% reduction in oil and commodity prices, potentially off-setting the inflationary effects of Europe’s potential oil embargo on Russia.

An easing of raw materials prices may “seduce” the committee to pause as they approach a 2.5% policy rate later this year, Wong said.

But wage pressures are likely to continue to grow, at least in nominal terms, she said, and sustain core service price increases.

“The path to a soft landing is very narrow,” Wong said, and depends on faster labor force growth to help satisfy demand for workers, which may be unlikely. “The Fed will have to keep hiking and cannot afford to stop until they are closer to 4%.”