Will the Fed Raise Interest Rates?

Global stock markets continue to convulse as participants and pundits try to divine whether Janet Yellen will really pull the trigger and raise interest rates.

Our bet is no.  Or if so, maybe by only a quarter point (25 basis points in bank-speak) just to prove the Fed hasn’t forgotten how to do it.  After all, it’s been about 8 years.

But we think not.

The list of reasons is far too long for this missive, but here’s a few:

The Dollar is Too Strong

We’re not saying WE think this is bad.  But the people in charge think so. 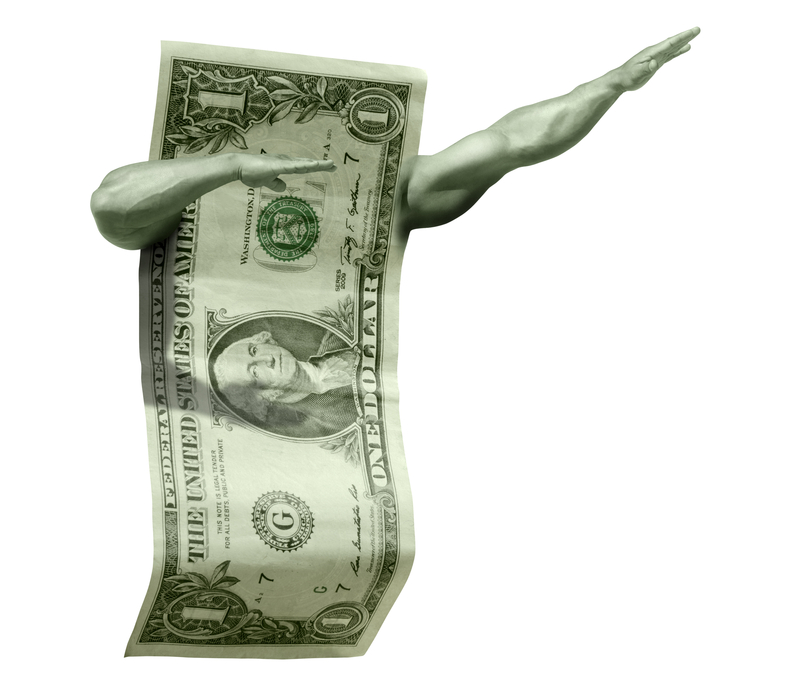 They say a strong dollar makes it harder for U.S. companies to sell exports…because it takes more foreign currency to buy anything denominated in dollars.

And U.S. companies doing business abroad are losing out when converting their foreign sales back into U.S. dollars.  So they say a strong dollar is bad for earnings and stock prices.

Also, a strong dollar means the U.S. government is paying more real interest on all its debt to foreigners.

The goal for a borrower is to receive strong dollars today and pay back weaker dollars later.  It’s why policy makers (and real estate investors) like a falling dollar.

A strong dollar is deflationary, which is the polar opposite of what the Fed wants (more on that in a moment…)…though most consumer we know LIKE IT when prices fall.

But when prices on things like houses, cars, stocks, bonds, etc., drop in dollar terms…and those things are being used as collateral, it means the value of the collateral drops.

That forces painful margin calls and creates a temptation for borrowers to bail on the debt.  Just think back to the sub-prime crisis which triggered the Great Recession.  It all started when debt went bad.

And speaking of debt, there’s the other major reason NOT to raise interest rates…

Uncle Sam is Drowning in Debt

When interest rates rise, payments go up.  That puts downward pressure on spending, which the financial brainiacs believe is the key to economic expansion. 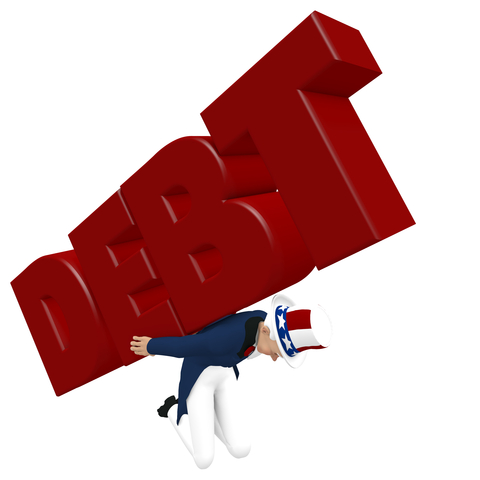 The problem today is that interest rates are SO LOW that even a 25 basis point increase is a substantial percentage increase.

If you have debt at 2% and rates rise by .25% that effectively increases your interest expense (and payment) by 8%.

That doesn’t sound like much, but when you’re Uncle Sam and you’re already paying out $381 BILLION in interest each year…an 8% increase costs an additional $30 BILLION.

Now if interest rates were to rise 100 basis points, say from 2% to 3%, that’s a 33% increase…or a whopping $125 BILLION increase in interest payments.

In financial terms, we call this a “train wreck”.

Since the last great re-set in the 80’s when then Fed chair Paul Volcker jacked rates up to over 20%, the government has gone aggressively into debt and lowered interest rates steadily for three decades.

But now we’re at the bottom of the interest rate barrel.

Then the only other options you have is to make more money. 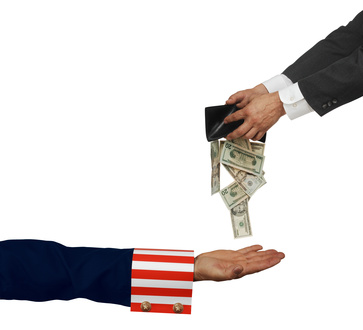 For Uncle Sam, this means raising taxes.  And there are two ways to do this.

The small government faction says lower rates to grow the private sector and take a smaller percentage of a bigger pie.

That is, lower tax rates, which they believe will leave more profits in the hands of entrepreneurs who will use it to expand their businesses (if they can find customers).

Then, when the pie is big enough, the smaller percentage of tax yields more absolute dollars to Uncle Sam.

The big government faction says raise taxes on the entrepreneurs and uber-rich and funnel that money through the government to the poor and middle class.

Then, when those everyday people spend all that money, it will provide customers and profits for the businesses, which will in turn result in even more tax revenue.

Obviously, these two policies are polar opposites and each one enrages the proponents of the other.

So everyone beats up on each other and nothing gets done.

BUT…there is another way… 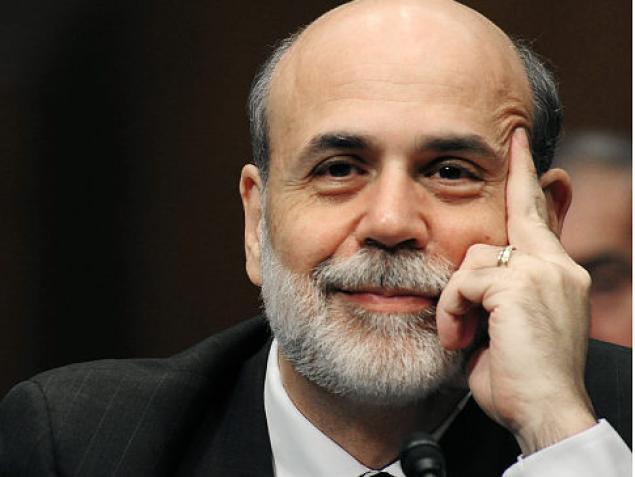 And on November 21, 2002 a guy named Ben Bernanke (who later took over for Alan Greenspan to become the chairman of the Federal Reserve) explained it in a speech before the National Economists Club in Washington DC.

“…the U.S. government has a technology called a printing press (or, today, its electronic equivalent) that allows it to produce as many U.S. dollars as it wishes at essentially no cost.”

“By increasing the number of U.S. dollars in circulation, or even by credibly threatening to do so, the U.S. government can also reduce the value of a dollar in terms of goods and services, which is equivalent to raising the prices in dollars of those goods and services.” 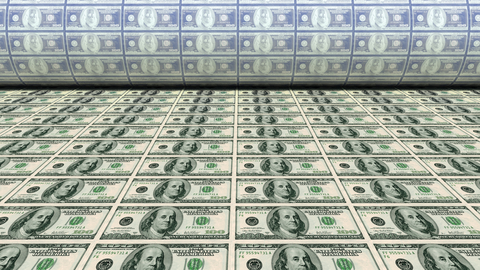 “We conclude that, under a paper-money system, a determined government can always generate higher spending and hence positive inflation.”

“…sufficient injections of money will ultimately always reverse a deflation.”

And just so you know we don’t make this stuff up, you can read the whole thing here.

So we think the Fed will find some excuse to turn the Quantitative Easing (QE) printing presses back on.

But, you say (correctly) didn’t they already do QE?  Like, 4 times?  Then why didn’t prices rise?

The Fed expanded its balance sheet (printed) by about 4 TRILLION DOLLARS since 2008.

Most of the money ended up in bonds (causing bond prices to rise and interest rates to fall)…or stocks (causing stock prices to rise to record levels)…and on banks’ balance sheets (as reserves parked at the Fed).

Of course, when you read Big Ben’s 2002 comments, he expected the banks to lend.  That’s the way all the new money was supposed to get to the market.

But frightened borrowers weren’t anxious to take on more debt.  They were inclined to save or pay off debt, rather than spend.

So there’s not been a long line of borrowers to lend to.

On the lender side, with the politicians busy POUNDING on the banks (and rightfully so)…banks decided it was safer NOT to loan…except to only the very BEST borrowers.

But now that all the very best borrowers have taken on their fill of debt, Uncle Sam is back to making nice with the banks…hoping to get all the money pushed out into the market.

And guess which sector they’re focused on?

Yep.  Real estate.  And it’s happening as we head into an election year.  But that’s probably just a coincidence.

Check out this headline:

This makes sense because we already have construction lending surging.  But builders can only borrow if they have buyers to sell to.  And most buyers can only buy if they can get financing.

So Uncle Sam can see that the bottleneck in the pipeline is at the street level…where real estate investors like you invest.

All this to say (and thanks for reading to the end) that the stock market gyrations could actually be GOOD for real estate in the mid-term.

When nervous stock investors seek safety, they’ll go to bonds and push interest rates down.  Great!  Borrow all you can and lock in LOW FIXED rates.

Make SURE your properties cash flow conservatively and focus on big, affordable markets with low taxes, a friendly business environment, and a diverse local economy.

Some frightened stock investors will pile into real estate…just like they did in 2001 after the tech bubble deflated.  The Chinese already are.

So, we wouldn’t be surprised to see a run UP in prices in the near term…which could be a chance to grab some equity and move it to safety…once again taking advantage of increasingly liberal lending. 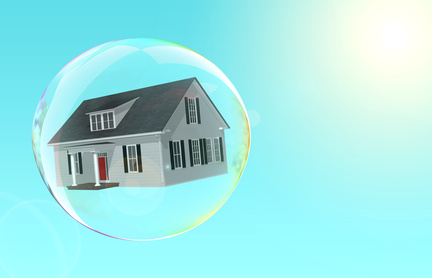 Eventually, the real estate bubble that’s beginning to inflate now will “pass a little gas”.  Or maybe a lot.

Sure, it will stink.  But it won’t kill you if you’re prepared to hold your breath and go in and do some bargain hunting.

Meanwhile, as all this unfolds, it’s a good idea to continue to watch and prepare.  You can’t control it.  But you can roll with it.