MANY lessons from Amazon’s HQ2 search …

You’ve probably noticed Amazon is taking over the world.  There’s a lot we could say, but we’ll narrow our focus to lessons for real estate investors …

In the May Housing News Report, there’s an article about Amazon’s ongoing search for their second headquarters (HQ2).

Even from just a real estate perspective, Amazon is a fascinating company to watch.  There are SO many lessons to be gleaned from watching what they’re doing … and how the world is reacting.

In case you’re new to the Amazon HQ2 story …

In 2017, Amazon put out a Request for Proposal (RFP) to bait cities across the U.S. into falling all over themselves to win Amazon’s coveted second headquarters …

At first, there were hundreds of cities in the hunt. We said at the time we think there’s an excellent chance Amazon will pick Atlanta.

Which brings us to now …

In the Housing News Report article, there’s a link to an analysis by Daren Blomquist of Attom Data Solutions.  Daren ranked the 20 finalists by comparing the cities on certain criteria defined in Amazon’s original RFP.

It’s the same process we did, except Daren used actual data … we just guessed. 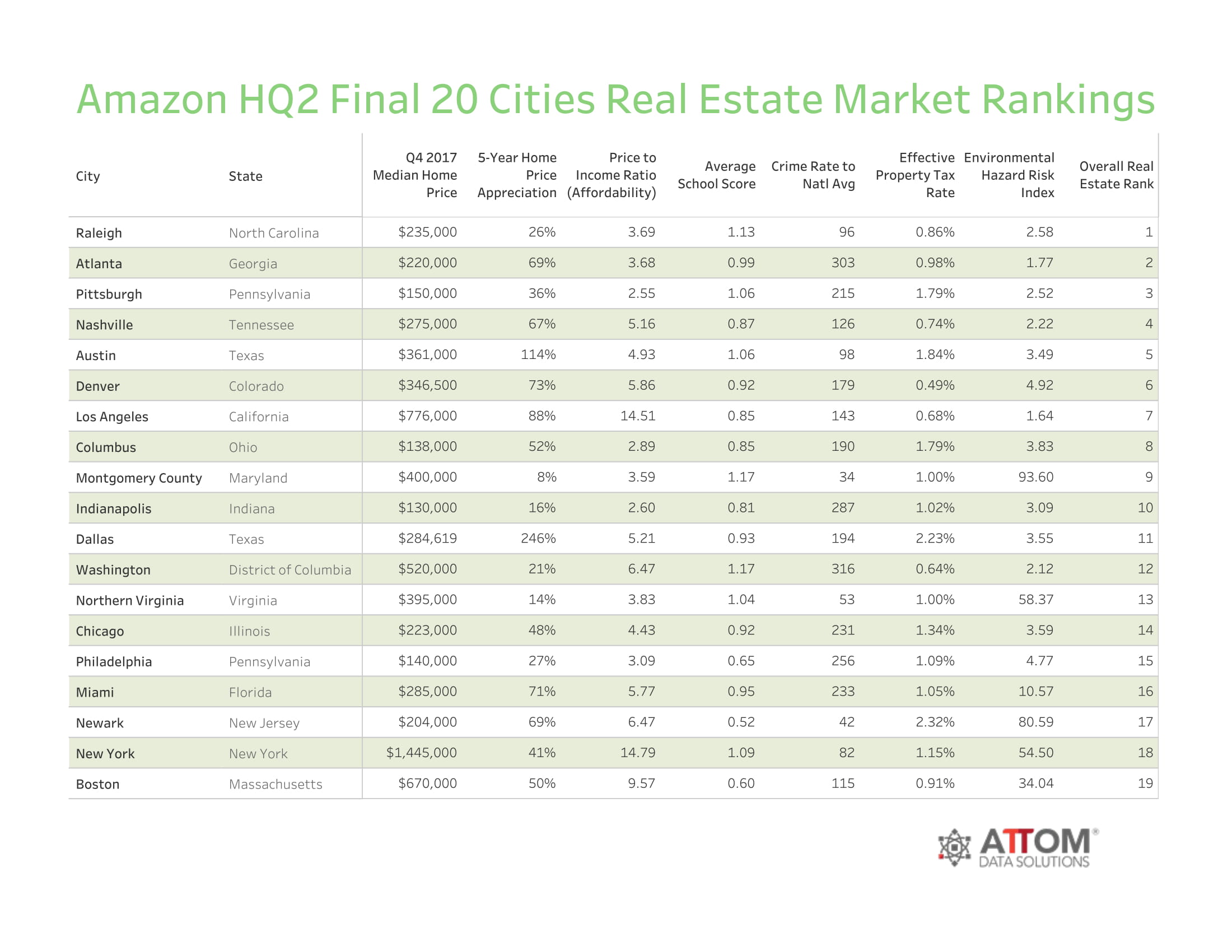 Notice Atlanta’s ranked #2.  So our hunch is holding its own … so far.

Meanwhile, there several useful things to glean from this chart and the story behind it, so let’s dig in …

Single family homes are NOT an asset class

When people say, “Housing is in a bubble!” … what housing are they talking about?  Indy?  Seems pretty cheap based on median price and affordability.

And when high-priced markets start hitting the top of their affordability range, people MOVE … to more affordable markets.  People ALWAYS need a place to live.

So an alert investor can get in front of growing demand and ride a wave up. That’s exactly what the folks who got into Dallas five years ago have done.

Equity happens … but not evenly

Look at the disparity in five-year appreciation rates among these markets … from just 8% in Montgomery County to 246% in Dallas.  HUGE difference!

Even in markets where median prices are similar … say Dallas and Miami… the five-year appreciation variance is substantial … Dallas coming in at 246% and Miami at “only” 71%.

So price doesn’t seem to be the deciding factor for appreciation.

And neither does property tax … as Dallas is second highest behind New Jersey (hey, New Jersey had to win at something), but Dallas is still king of appreciation.

Meanwhile Denver has the lowest property tax … half of Atlanta … yet their appreciation rates were about the same.

And price-to-income ratios don’t seem to make the difference either … as Los Angeles and New York are both equally unaffordable, yet New York has half the appreciation.

Obviously, this is just one chart … and it’s easy to get lost in the weeds.  We don’t want paralysis from analysis.  So charts like these are just the start of a deeper dive.

But it doesn’t have to be complicated.  Here’s what we look for …

What do winners have in common?

Dallas and Austin are both triple-digit appreciators … even though Dallas grew at twice the rate of Austin.  Is it just simply they’re both in Texas or is there more to the story?

Of course, 10 years ago, Dallas was coming off being one of the slowest appreciating markets in the country.  So something changed that dramatically…

Prices get bid up when supply is growing more slowly than demand with capacity to pay.

So though you can see affordability based on income on this chart, you can’t see supply and demand drivers.  Neither can you see the economic drivers.

But you need to look at them.

That’s why we say you can’t study 20 markets well.  It’s too much.  Use a chart like this to pick your top three … and get to know them very well.

What markets are poised for growth?

Once you understand what makes a market like Dallas tick … and how it went from no growth to explosive growth … you can watch for similar factors in sleepy markets.

When you spot something interesting, you go in for a closer look.  If things go your way, you get there before the masses … and you get to catch a rising star!

What are the big players doing?

Big players can do research you can’t.  But that’s okay because you can piggy-back on their hard work.  It’s like cheating off the smart kid in school, except you don’t get detention.

Amazon is a juggernaut in American business … and their power is impacting real estate of all kinds … retail, industrial, and even office and housing in markets where they have a footprint.

That’s why SO much attention is being paid to their search for HQ2.

But another reason to watch is they’re leaders in business decision making too.  Other employers are watching what Amazon does and being influenced by it.

So when Amazon ultimately picks a city, we’re guessing other companies will cheat off their homework … and pick the same city.

The reason we bet on Atlanta is because many other Fortune 1000 companies had already chosen Atlanta as a great place to set up shop.

We don’t know what process they went through to get there.  We just know they did.  So as Amazon goes through its process … they may reach similar conclusions.

Of course, Raleigh is also home to a comparable number of big companies.

But based on the world-class airport, huge labor pool, access to higher education, major distribution, and a business-friendly environment … though it’s close, we still think Atlanta has the edge.

Then again, Jeff Bezos isn’t consulting with us, so we’ll just have to wait and see like everyone else.

Meanwhile, as the field narrows, we’ll continue to learn where corporate leaders think the best location is for their businesses, employees, and new job creation.