The REAL lesson from the short-lived attack on silver … 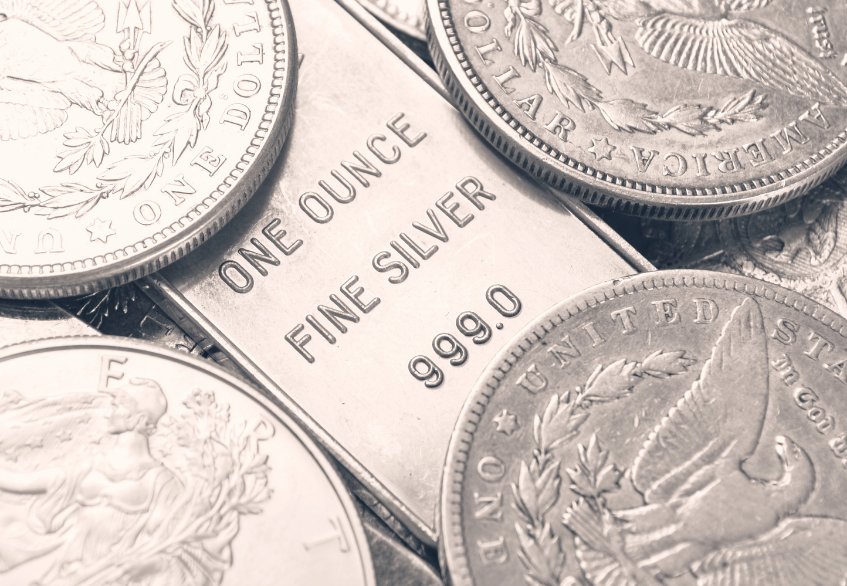 The David versus Goliath saga of Robinhood day traders has alerted Main Street that Wall Street is a rigged game … in favor of club members.

And it seems Main Streeters aren’t in the club.

But while the GameStop run was fun to watch, the silver spectacle is MUCH more interesting for reasons we’ll explain momentarily.

Most real estate investors don’t pay much attention to financial markets. We found the hard way this is a big mistake. Macro matters to Main Street.

We learned to watch the bigger picture … especially bond markets, the dollar, energy, and precious metals.

So when silver popped to the top of our newsfeed, we perked up.

Silver, like gold, is a monetary metal. Precious metals prices are a gauge of the relative strength or weakness of the dollar.

Of course, dollar strength affects interest rates … which are of GREAT interest to real estate investors.

To keep rates down, dollars need to be perceived as “strong.” When the dollar is weak, lenders demand compensation for their “loss” of purchasing power.

If you loan us a dollar today when it buys 2 cans of soda, and we pay you back a year later when a dollar will only buy 1 can of soda (a soda inflation rate of 100%) …

That’s a simplified example with exaggerated numbers, but the point is inflation SHOULD cause interest rates to rise.

All that makes sense in the classroom. But the real world is weird.

Who’d lend money for a NEGATIVE yield? Yet there are TRILLIONS in bonds globally with negative yields.

As you may know, no one buys a bond to lose money. So investing for yield isn’t the goal. The buyers are going for capital gains.

It’s the same as the way novice small property investors in a mania will bid up rental house to negative cash flow.

They’re not buying income. They’re betting on the price. Condo flipping in Miami comes to mind.

The idea is to sell to a “greater fool” and profit on the trade. But in sophisticated financial markets, who’d be dumb enough to be the last fool holding the bag?

The answer is … only people who don’t care about losing “money” because they can print all they want. Central banks. Their motive is to suppress interest rates … at all costs.

That’s because there’s SO much debt in the world, rising rates would trigger defaults and insolvency of astronomical proportions.

BUT … the cost of low interest rates is the value of the currency.

That’s because to bid UP bonds to drive DOWN rates, you must create a LOT of currency … in this case, dollars.

Dollars are a commodity in that their value is a by-product of supply and demand. But dollars aren’t valued in dollars. Many people miss this.

Dollars are valued by purchasing power … what they will buy.

Economics 101 says when supply grows in the face of falling demand, prices fall. Dollars are no different.

… you’d expect the value (purchasing power) of the dollar to drop.

This is the classic definition of “inflation” … where dollars lose purchasing power.

In case you think that’s not a thing … merely a conspiracy theory … we direct your attention to Exhibit A … the purchasing power of the U.S. dollar since 1933 …

Of course, fancy charts and graphs created from dubious data with complicated formulas can be confusing … if not misleading.

Consider that the Consumer Price Index is the “official” gauge of inflation.

But according to the CPI report, “the all-items index rose 1.4 percent for the 12 months ending December.”

Sooo … when it comes to inflation … nothing to see here, folks. Move along and consume.

Enter precious metals … (did you think we forgot?) …

Gold and silver were once both money and currency. It’s a long story we’ve told many times before, but in case you’re not clear on the difference …

Money is a store of value. Currency is a medium of exchange.

J.P. Morgan (the man, not the bank) famously said, “Gold is money. Everything else is credit.”

Take a look at the greenback in your wallet. It says, “Federal Reserve NOTE.” That’s “note” like a promissory NOTE. Like an IOU. Like “credit.” Get it?

So a FRN is not money in the true sense. It’s credit. J.P. Morgan was right.

If that’s too esoteric, go to Coinflation.com and compare the real value of a 1964 silver quarter to a 1965 non-silver quarter.

You’ll see that money (silver) kept its purchasing power over the decades, while currency (dollars) did not.

Precious (monetary) metals are an easy-to-understand gauge of inflation.

So if you’re the Wizard behind the curtain and don’t want Dorothy from Kansas and her common-folk friends to see your Emerald paper’s not so powerful, you’d say …

“Pay no attention to those shiny objects. The great and powerful CPI has spoken!”

Then you might try to rub the glitter off those pesky shiny objects as best you can … maybe by pulling levers, blowing smoke, and making noise.

So … how’s all that (alleged) suppression going? Pretty good over the last few days … but long term?

In other words, the dollar (currency) was DOWN against metals (money) by those same percentages.

And by the way, most real estate was up a bunch too.

Now, does this mean there’s no metals price suppression? Maybe.

Or maybe precious metals are “up” despite being suppressed … and the dollar’s in even worse shape than indicated.

It doesn’t matter. The writing is on the wall.

A spike in silver and gold prices is a gauge of a falling dollar. We’ve been covering this for years.

If you earn, invest, borrow, or denominate wealth in dollars, pay attention to the REAL value of the dollar … it’s becoming more urgent to look for ways to hedge.

Of course, we don’t know what will happen or how fast, but the trend is clear, and things are picking up speed.

Debt, spending, printing, awareness, and the reactions … are all growing exponentially.

Remember … exponential anything means you’re halfway from the end with only ONE move left.

So you’re not 36% away from the end, you’re ONE cycle. Slowly … then SUDDENLY. A shout to our friend Chris Martenson for pointing this out.

What’s the breaking point? When does the world give up on the dollar?

No one knows. But when it breaks, it will likely break FAST … and just ONE cycle from anything past halfway.

So what’s an investor to do?

Study. Listen to informed people and get into meaningful conversations. Start a local club.

Attend conferences such as The Real Estate Guys™ Investor Summit and the New Orleans Investment Conference.

Watch precious metals. Too many real estate investors are ignorant of how gold and silver fit into the financial system and portfolio strategy.

Watch our Making Sense of Silver video series and read Dana Samuelson’s special report, A Guide to Getting Started in Precious Metals.

To be clear, we don’t consider precious metals as an investment or trading vehicle.

Sure, you can trade metals and churn out currency. And you can use arbitrage to create cash flow on metals, just like you can real estate equity.

But we think the core function of precious metals in a real asset portfolio is to provide liquid equity … hedge inflation … and reduce counter-party risk.

Look for more discussion on these important concepts in our radio show, videos, events and blogs. Stay tuned!