If you’re one of those who take The Real Estate Guys™ to the gym, make sure you carbo load first! This one’s a whopper!  Our radio audience only got an hour, but the podcast audience gets the whole enchilada.  That way whether you like American or Mexican, there’s something for everyone.

A few weeks back, we went to Las Vegas for the 7th Annual Freedom Fest conference.  This was our first time and we weren’t sure what to expect.  But after our previous interview with event founder, economist Mark Skousen, we thought it would be worthwhile.  It turned out even better than we thought!

After being near the epicenter of the financial earthquake which rocked the real estate portfolios of even the most experienced investors, we’ve put a big emphasis on studying economics.  Who cares if you’re expert at fixing up properties, managing tenants or putting together syndications if property values are crashing, tenants don’t have jobs, loans aren’t available, and people are too scared to act?

So we started looking for people who saw it coming, put their predictions in writing and got it right for the right reasons.  Hindsight’s often 20/20, but seeing the storm coming 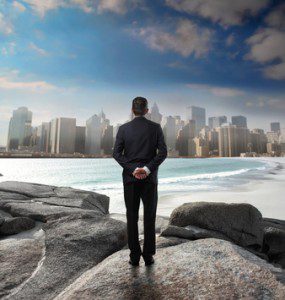 while there’s still time to shutter the windows is better.  You might not be able to avoid bad economic weather, but with advance notice at least you can prepare!

We looked at the lineup of speakers at Freedom Fest and decided this would surely be an eye-opening experience. We were especially excited about Peter Schiff, author of Crash Proof 2.0 (a highly recommended read!).  Schiff called the crisis for the right reasons – and way ahead of time.  We’re happy to say we got a lengthy interview with Mr. Schiff to see what he’s thinking now – which is the feature of our next show.

While we’re boasting about awesome interviews, we also had a chance to talk with billionaire CEO of Forbes Magazine and former Presidential candidate, Steve Forbes.  That interview is coming up in a couple of weeks, so stay tuned!  The best way to be sure you don’t miss any of our exciting episodes is to subscribe to our podcast via iTunes (shameless plug). 😉

Today’s episode is about talking to LOTS of people! It was like one of those speed dating sessions.  Robert sat at the microphone from early morning to late at night, and Russ rounded up a long line of interesting people to interview.

Featured in this episode of The Real Estate Guys™ Radio Show:

And a long parade of very special guests (in order of appearance):

Dave Fessler, Energy & Infrastructure Expert for the Oxford Club.  Dave discusses his views on the future of energy and infrastructure and their impact on jobs and the economy.  He also comments on “the paradox of thrift” – how consumer savings is actually fueling the recession.  He tells us how long he thinks it’s going to last, and where he believes America’s best chance for job creation are right now.

Vernon Jacobs, CPA, is an expert in international taxation.  Vern tells us what to consider when investing or employing asset protection strategies offshore.

Robert Barnes, Attorney, is part one of two back to back interviews with lawyers from a premier tax and investment fraud law firm that went 3 for 3 (that’s pretty good!) in three of the top four high profile tax cases in the U.S. (you’d recognize the names).  Mr. Barnes reveals the worst thing you can do when contacted by the IRS.

Robert Bernhoft, Attorney, is part two of our tax and investment fraud attorney interviews.  Mr. Bernhoft describes what you can do to proactively avoid problems with both your investors and regulators; and shares how his firm uses specialized “non-litigation” techniques to recover misappropriated funds without going to court.

Steve Hochberg, Chief Market Analyst for Elliott Wave, works closely with Robert Prechter.  Prechter’s 2002 NY Times best seller, Conquer the Crash, accurately predicted the current financial crisis.  While everyone is running scared of inflation, Steve says DEFLATION is actually the big near term threat.  He believes we are “on the precipice of the greatest stock market decline of our lifetime.”

Patri Friedman, Executive Director and Chairman of the Board of The Seasteading Institute.  A city on the sea?  Really??? Before you write it off as Looney Tunes, go to their website and look at their management team.  These guys are all brilliant.  We’re talking Stanford, Harvard, Yale.  Wow.  Have you heard of Pay Pal?   Yeah,the founder is on their board.  And why were they at Freedom Fest?  Take a listen!

Leon Louw, Executive Director of the Free Market Foundation, all the way from South Africa!  Why?  To raise money to advance property ownership rights for blacks in South Africa. For what it’s worth, we didn’t see any evidence of racism at Freedom Fest, though it was full of “tea baggers”.  Obviously, Leon felt people at the event would be supportive of his cause. From our observations he was right.  But this isn’t a political interview. any more than our show is political.  We just  want to understand what people are thinking and doing, and how it creates or undermines real estate opportunities.  Think about the ramifications on demand in a market where a large part of the population, formerly locked out, suddenly has access to buy property.  Very interesting stuff.

Terry Coxon, author of Unleash Your IRA, shares a powerful concept for maximizing your Individual Retirement Account.  We thought we knew all about this topic, but Terry shares a strategy we hadn’t considered. Now we’re hyped to read his book.  With the demise of home equity, and a growing number of people predicting a tough stock market (at best); and lending getting even tighter from financial reform, we think IRA’s and rollover 401k’s are one of the BEST sources of private investment capital.  That makes this a topic worth exploring!

Ron Holland, editor of two financial newsletters and 30 year financial industry veteran, has something to say on the topic of IRA’s.  And it’s concerning.  He shares what he thinks is the greatest threat to your retirement account.

Terry Easton, author of Refounding America and contributor to Human Events. Terry is an uber-conservative / Libertarian and has a lot to say on the topics of economics, politics and real estate.  We came to hear a lot of opinions and it just so happens that Terry has a lot of opinions.  But since they come from a long history of study and involvement, we think they’re worth listening to.

All in all, Freedom Fest was a great experience and we’re very likely to attend next year’s event.  We met great people, got valuable insights, and had our paradigms stretched (we’ve been icing them since we got back).  Most of all, we see the economy and real estate from a much broader perspective.  As we continue to seek out markets, opportunities and product niches to invest in, we are convinced a bigger perspective will pay huge dividends.

Remember – our next two episodes feature our interviews with Peter Schiff and Steve Forbes!